President Obama may have just turned the G8 into the G7 and dismissed Russia as a “regional power,” but this is no Bobby Fischer vs. Boris Spassky. In this geopolitical chess match, the Russian is outmaneuvering the American at every turn.

Putin’s antics are nothing new—he’s been quietly undermining the US for over a decade. Let’s examine some of his more successful gambits from the past, and see what they can tell us about the present.

In 1998, Russia defaulted on $40 billion of domestic debt, forcing the Federal Reserve to engineer a bailout of hedge fund Long Term Capital Management.

Three years later, Putin used the distraction of the Olympics to invade US ally Georgia. While the world was focused on the Beijing games, the Russian leader told George W. Bush, “War has started.”

But the Georgia invasion was nothing compared to the bomb Russia was dropping on US markets. Treasury Secretary Hank Paulson was in Beijing for a family trip to see the games, but he worried about Fannie and Freddie the whole time, as he was told the Russians had approached the Chinese to work together to dump their Fannie Mae and Freddie Mac shares.

In his book On the Brink, Paulson wrote the motivation was “to force the US to use its emergency authorities to prop up these companies.” He went on, “The report was deeply troubling—heavy selling could create a sudden loss of confidence in the GSEs and shake the capital markets. I waited till I was back home and in a secure environment to inform the president.”

Of course, Putin spokesman Dmitry Peskov denied the bear raid conspiracy. To this day, the former Treasury secretary claims the two countries never carried out the plan. However, Russia did unload all $65.6 billion of its Fannie and Freddie debt that year.

As for the Chinese, Aaron Back reported for the Wall Street Journal in 2011, “China’s selloff of Fannie and Freddie securities in 2008 was widely credited with pushing up mortgage rates in the US at a time Washington was struggling to revive housing sales.”

In the end, less than a month after Paulson was given that information in Beijing, the US government took over Fannie and Freddie and placed them into conservatorship.

How many of the world’s leaders would have the foresight to structure a loan as a private-sector eurobond? One sovereign-debt expert called the structure of Russia’s $3 billion loan to Ukraine “clever.”

Here’s why: instead of handing aid money directly to Ukraine, Russia had the Ukrainian government float $3 billion in bonds denominated in euros. Russia then bought the bonds. But that’s not all—the Russians had a provision written into the bond that if the Ukraine’s debt-to-GDP level reached 60%, Russia could call the bonds for immediate payment.

Such a qualification in government bonds is very unusual. Mitu Gulati, a sovereign-bond expert, says he has never seen a government bond with a similar debt-to-GDP provision. Most sovereign debt is ‘covenant-lite.’”

Today, Ukraine has eurobonds outstanding to several countries, so stiffing only Russia isn’t an option, because it would hurt the price of all their debt. America’s beltway pundits agitating for a large aid package to Ukraine should realize that Putin’s foresight ensures that any US aid money will find its way to Moscow.

After being out of office four years, Putin took over again in 2012. A year later, the Russian president didn’t just say the US was endangering the global economy with its dollar monopoly—he put Russia’s money where his mouth was. Putin made sure the world’s largest oil producer would become the biggest gold buyer as well, adding 570 tonnes in the last ten years, much of it on his watch. 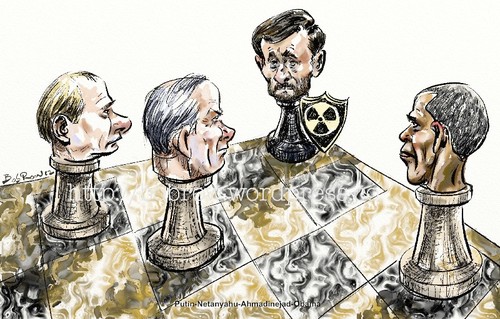 “The more gold a country has, the more sovereignty it will have if there’s a cataclysm with the dollar, the euro, the pound, or any other reserve currency,” Evgeny Fedorov, a lawmaker for Putin’s United Russia, said in a telephone interview with Bloomberg.

Putin had his central bank start loading up on the yellow metal when the price was just $495 an ounce. This makes him either smarter or luckier than, say, former UK finance minister Gordon Brown, who sold 400 tonnes of the metal when gold traded under $300.

It’s safe to say Putin is smarter than your average politician. For instance, Saudi Arabia’s influential intelligence chief, Prince Bandar bin Sultan, met with Putin last year and offered to buy $15 billion worth of arms from Russia in return for Putin abandoning his support of Syria. Bandar even assured Putin that the Saudis would never sign an agreement allowing a gulf state to ship gas through Syria.

Putin just laughed. He knows a pipeline through Syria would mean Russia’s Gazprom would lose its European gas business to Qatar.

Zero Hedge pointed out last August, “What is shocking in all of this is that Saudi Arabia was so stupid and/or naïve to believe that Putin would voluntarily cede geopolitical control over the insolvent Eurozone, where he has more influence, according to some, than even the ECB or Bernanke. Especially in the winter.”

Saudi promises or not, Putin’s no dummy. Europe obtains 30% of its natural gas from Russia and half of that runs through Ukrainian pipelines. Putin’s energy stranglehold is strongest in Eastern Europe, where several individual countries are at Russia’s mercy: Slovakia relies on Russia for 93% of its gas; Poland (83%), Hungary (81%), the Czech Republic (66%), and Austria (61%) are captive customers of Russia, too.

Ukraine’s prime minister, Arse Yatsenyuk, says Russia could use energy as a “new nuclear weapon.” As it is, Ukraine is $1.89 billion behind in payments to Russian company Gazprom for gas.

Putin has been a laughingstock in the West for spending a reported $60 billion on the Sochi winter games. But while the world was focusing on curling and ice dancing, he was amassing troops at the Crimea border and managed to engineer a bloodless annexation before the Paralympics were over.

In response, the most powerful country in the world sanctioned a few Russian individuals and a mid-size bank Putin does business with. This toothless action gave Putin another laugh, and he responded by imposing some sanctions of his own on John Boehner, Harry Reid, and others, as well as 13 Canadians.

While Obama and Angela Merkel make nasty noises in Russia’s direction, Reuters reports, “The Holy Grail for Moscow is a natural gas supply deal with China that is apparently now close after years of negotiations. If it can be signed when Putin visits China in May, he will be able to hold it up to show that global power has shifted eastwards and he does not need the West.”

“The worse Russia’s relations are with the West, the closer Russia will want to be to China. If China supports you, no one can say you’re isolated,” said Vasily Kashin, a China expert at the Analysis of Strategies and Technologies (CAST) think tank.

Russia is also looking to redirect the flow of its oil. “Russia is trying to diversify its energy flows away from its core European markets,” according to Reuters, “with Rosneft leading the race with plans to triple oil flows to China to over 1 million barrels per day in coming years.”

Rosneft is the top oil producer in the world and is run by Putin ally Igor Sechin. Sechin wrapped up a recent Asian trip by meeting with the folks at India’s state-run Oil and Natural Gas Corp ONGC, Reliance Industries, an Indian conglomerate, and India’s biggest refiner Indian Oil Corporation. China and India’s combined population is over 2.5 billion. That’s a lot of potential customers.

Vladimir Putin worked as a KGB officer stationed in East Germany from 1975 to 1989. While the future Russian president worked the front lines of the Cold War, the future US president was going to high school in Hawaii, followed by college in Los Angeles and New York, before heading to Chicago to become a community organizer.

When Putin was instructing his central bank to buy gold, Barack Obama was learning to navigate Capitol Hill as a freshly minted US senator. Obama was on the presidential campaign trail spouting empty campaign slogans when Russia orchestrated the meltdown of Fannie and Freddie.

Today, Obama is waging multiple wars around the globe while gumming up the US economy with increased regulation and the highest corporate taxes in the world. Putin? He’s busy selling oil and gas and buying gold. It doesn’t seem like a fair fight.

Besides having gold, oil, natural gas, palladium, and any number of other critical natural assets, Russia has improved its government’s finances manyfold while the United States has been borrowing its way to insolvency. Russia’s current debt-to-GDP ratio is 8.4%, after being a reported 57% when it defaulted on its debt. Uncle Sam is going in the opposite direction. US debt to GDP was 60% when Russia defaulted in 1998—now it is over 100%.

The bottom line is that Russia is anything but “regional.” Obama should realize Putin’s ground troops are the least of America’s worries. The Russian president’s financial moves are what affect us all. And he’s running circles around Obama in the places it counts—from forging relationships with China and India to his accumulation of gold.

You’re probably wondering how to make money while Putin schools the teleprompter-in-chief. Casey Research Chief Economist Bud Conrad penned an excellent piece on Ukraine and Putin in last week’s Dispatch, and it was just an appetizer for his in-depth report coming in the April Casey Report.

Click here to take The Casey Report for a risk-free spin, and to get Bud’s upcoming in-depth analysis hot off the digital press.

'Pigeon chess' or 'like playing chess with a pigeon'[note 1] is a figure of speech originating from a comment made in March 2005 on Amazon by Scott D. Weitzenhoffer[2] regarding Eugenie Scott's book Evolution vs. Creationism: An introduction:

As such 'debating techniques' are not limited to creationists, the phrase has entered the general Internet lexicon,[3] together with the source quotation, which is sometimes cited as an anonymous 'Internet law'. The reference to creationists is usually replaced with whatever group the user is arguing with.

Andrew Schlafly was similarly described for his contributions to Usenettalk.origins in 2002:[4] 'I tried it for a while, but arguing with Andy is like playing chess with a small child who doesn't know the rules.'

The 2007 cartoon 'King me!' by Rudis Muiznieks[5] uses a similar joke and has achieved some notice in the skepticsphere:[6]

(Above image copyright © 2007, Rudis Muiznieks. This work is licensed under a Creative Commons Attribution-Noncommercial 3.0 License)