Pigeon Run is a tributary of Sullivan Branch in Sullivan County, Pennsylvania, in the United States. It is approximately 1.3 miles (2.1 km) long and flows through Davidson Township.[1] Its watershed has an area of 0.78 square miles (2.0 km2). The stream has a low pH and sometimes has poor water quality, although that could potentially be remedied. The main rock formations in the area are the Catskill Formation, the Huntley Mountain Formation, and the Burgoon Sandstone. The main soil associations in the vicinity of the stream are the Deep-Wellsboro-Oquaga association, the Norwich association, the Morris association, and the Oquaga association.

Pigeon Run begins in eastern Davidson Township, not far from the border between Sullivan County and Luzerne County. It flows south for some distance before entering a very steep valley. Approximately halfway down the valley, the stream turns southwest. It reaches its confluence with Sullivan Branch at the end of the valley.[1]

One of a handful of waterfalls found upstream from the lowest fall on Pigeon Run. State Game Lands 13, Sullivan County.

Pigeon Run is considered by the Pennsylvania Department of Environmental Protection to be impaired by atmospheric deposition due to metals and pH.[3] 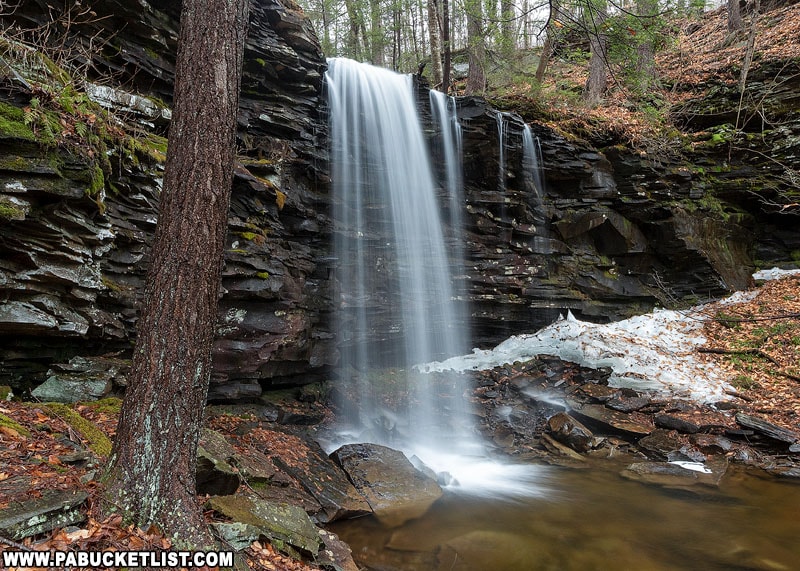 There is a bed of iron ore on Pigeon Run.[5]

Pigeon Run can only be accessed by hiking.[3] A trail crosses the stream.[7]

Pigeon Run is designated by the Pennsylvania Department of Environmental Protection for use by aquatic life.[3]

Pigeon Run has a waterfall known as Pigeon Run Falls.[7]

The restoration of Pigeon Run is the fourth phase of the East Branch Fishing Creek Restoration Plan. This phase, which also includes the upper reaches of Sullivan Branch and some of its other tributaries, is estimated to cost $400,000, making it the most expensive phase of the restoration plan.[2]

Pigeon Run was first listed by the Pennsylvania Department of Environmental Protection as impaired in 2002. As of December 2011, a total maximum daily load is scheduled for 2015.[3]