Recently arrived in London with his mother and sister (the rest of the family remain in Ghana), eleven year-old Harri needs to learn the rules and language of the street – and quickly.

Living on the eleventh floor of a block of flats on a rough London council estate where the Dell Farm Crew rule the roost, Harri is a kid who loves his family and with his own dreams. But then a boy is knifed to death on the estate: the police call for witnesses is met with silence. With a little too much TV experience and crime series in particular to his name, Harri along with best mate Dean, enticed by the thrill and adventure, decide to naively start their own investigations. 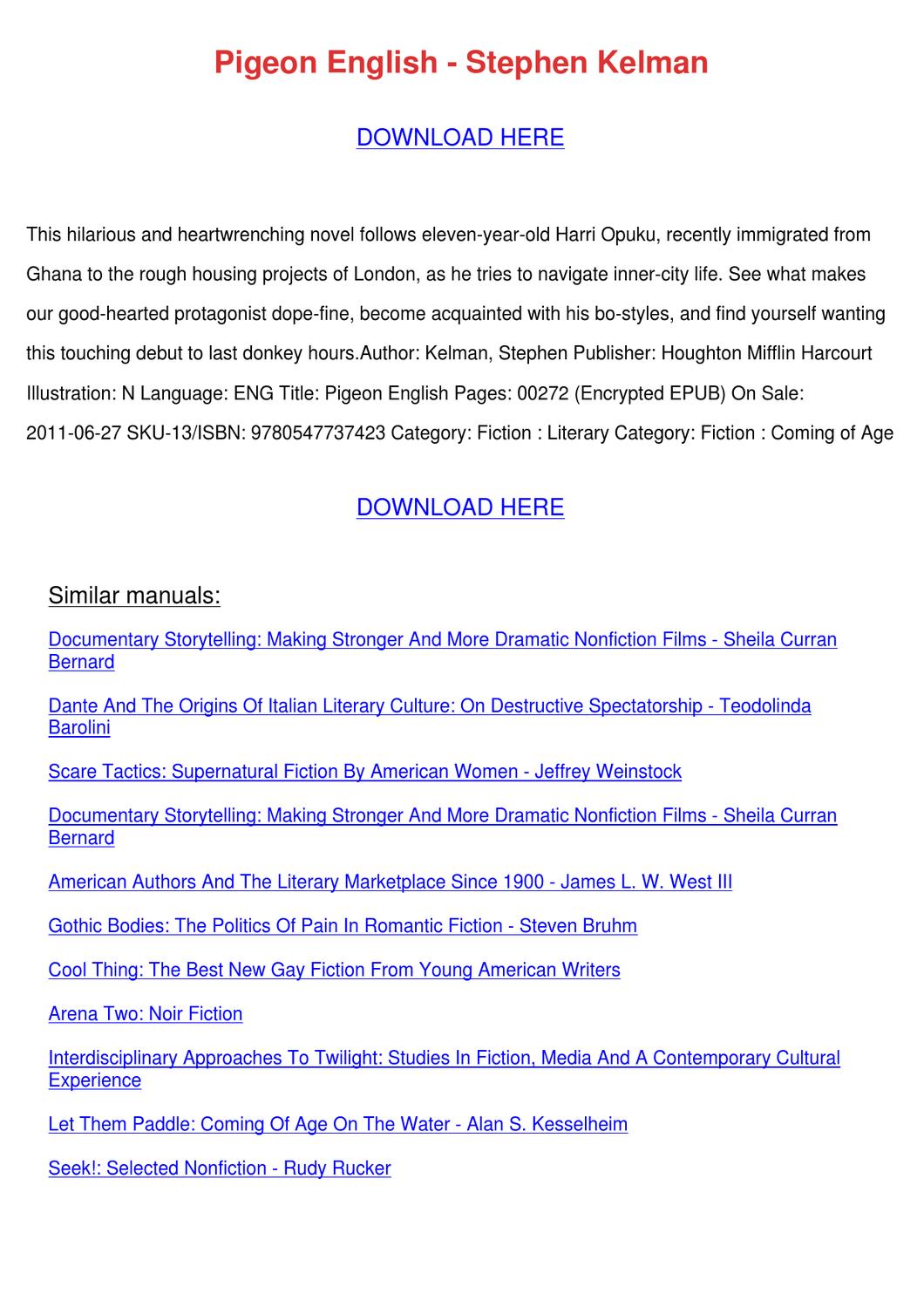 Pigeon English is something of a hybrid first novel from Stephen Kelman. That it is homage to the experiences of young migrant kids and alien environments is unquestionable. But Kelman himself also confirms that it is homage to the 2000 murder of 10 year-old Damilola Taylor on London’s notorious North Peckham estate by local gang members. Taylor had only recently arrived with his family from Nigeria.

But the novel is also a celebration of childhood, friendship and the innocence (or not) of experience in an ever-changing world. Told from Harri’s infectious and ebullient curiosity and glorious multicultural slang, he might possibly be the fastest runner in his school: he certainly believes himself to be in love with classmate Poppy: he misses his Papa, grandma and baby sister still in Ghana. But Harri is also wary of gang members X-Fire and Killa along with his sister’s worldly friend, Miquita (girlfriend of Killa).

It’s an endearing read tinged with more than a little sadness – the waste, the hopelessness, the fear, the despair of life in such environments. Harri tries to make the most of it – and it is his enthusiasm for the world around him that draws you into the book.

Pigeon English was shortlisted for the 2011 Booker Prize, but lost out to Julian Barnes and The Sense of an Ending.

Newly arrived from Ghana with his mother and older sister, eleven-year-old Harrison Opoku lives on the ninth floor of a block of flats on an inner-city housing estate. The second best runner in the whole of Year 7, Harri races through his new life in his personalised trainers – the Adidas stripes drawn on with marker pen – blissfully unaware of the very real threat all around him.

With equal fascination for the local gang – the Dell Farm Crew – and the pigeon who visits his balcony, Harri absorbs the many strange elements of his new life in England: watching, listening, and learning the tricks of urban survival.

But when a boy is knifed to death on the high street and a police appeal for witnesses draws only silence, Harri decides to start a murder investigation of his own. In doing so, he unwittingly endangers the fragile web his mother has spun around her family to try and keep them safe.

A story of innocence and experience, hope and harsh reality, Pigeon English is a spellbinding portrayal of a boy balancing on the edge of manhood and of the forces around him that try to shape the way he falls.