Highlights in Mo’s residency include the world premiere of Don’t Let the Pigeon Drive the Bus!(The Musical); the world premiere orchestral rendition of Goldilocks and the Three Dinosaurs (a Symphonic Spectacular) with music composed by Kennedy Center Artistic Advisor Ben Folds for the National Symphony Orchestra; Mo Willems & the Storytime All-Stars present: Don’t Let the Pigeon Do.

What About Worms!? An Elephant & Piggie Like Reading! Book

Mo Willems is best known as the award winning Author and illustrator of kid’s favorites like Don’t Let the Pigeon Drive the Bus!, the Elephant and Piggie series and the Knuffle Bunny books. He now also has a brand new app! Pigeon Presents: Mo on the Go! Where you try to fill your sticker vault by playing mini games, drawing and dancing! The fun includes: Draw with Mo: Use your imagination. The Pigeon Wants a Match Game by Mo Willems Plush w/ Tiles/ Cards. Time left 1d 19h left. 0 bids +$6.99 shipping.

Tiger is BIG. Tiger is BRAVE. And Tiger is NOT afraid of anything . . . except WORMS!

Unlimited Squirrels: I Want to Sleep Under the Stars!

For the third-time ever, read five Elephant & Piggie adventures in one BIGGIE bind-up.

I’m ON It! An Elephant & Piggie Like Reading! Book

Goat likes to lead. Goat also likes Frog to follow. Will they both make it through a high-stakes game of Follow the Leader?

Best friends Elephant and Piggie introduce kids to their favorite books—brought to life in original stories created by a variety of award-winning contemporary children’s book authors and illustrators.

Mo Willems, a number one New York Times best-selling author and illustrator, has been awarded a Caldecott Honor on three occasions (for Don’t Let the Pigeon Drive the Bus!, Knuffle Bunny: A Cautionary Tale, and Knuffle Bunny Too: A Case of Mistaken Identity). Don’t Let the Pigeon Drive the Bus! was also an inaugural inductee into the Indies Choice Picture Book Hall of Fame. Mo's celebrated Elephant & Piggie early reader series has been awarded two Theodor Seuss Geisel Medals (for There Is a Bird on Your Head! and Are You Ready to Play Outside?) and five Geisel Honors (for We Are in a Book!, I Broke My Trunk!, Let’s Go for a Drive!, A Big Guy Took My Ball!, and Waiting Is Not Easy!). In 2019, the Kennedy Center in Washington, DC named Mo the first-ever Education Artist-in-Residence. Mo began his career as a writer and animator on Sesame Street, where he garnered six Emmy Awards.

If you would like to send Mo an e-mail, please ask a grown-up to write to: [email protected]

Due to the Covid-19 pandemic, we are unable to receive physical mail at this time. We cannot guarantee that Mo will be able to personally respond to your e-mails, but every e-mail will receive a reply.

Don’t Let the Pigeon Run This App! is a quirky and creative interactive universal storybook app which brings to life Mo Willems's character, Pigeon, found within his hit series of picture books.

We love the book Don’t Let the Pigeon Drive the Bus and other stories from this series in our house, so I was very eager to review this application. For those who do not know, this app is based on titles such as Don’t let the Pigeon Drive the Bus or Don’t let the Pigeon Stay Up Late, as these books open with the Bus Driver asking the readers to do him a favor and keep reckless Pigeon out of trouble by not letting him drive the bus or stay up late and so forth. The rest of the story is about the pigeon trying every trick in the book to convince one to do what he wants, allowing children to stand up to the pigeon, saying “no” to his pleas.

I love these books. Pigeon can be cheeky, and my son has used pigeons’s one-liners, such as offering to “Give you five bucks” himself to try to stay up late. For this reason, some parents may feel that this pigeon is a bad influence on children, but I love the idea of my son practicing his ability to say “no” to this scheming pigeon as I want him to be prepared to stand his ground later in life when he is confronted by peer pressure, and I want him to recognize when he is being manipulated.

This app nicely translates these titles into witty videos that kids and adults will really enjoy. I like the fact that there are three levels of interaction available to best work with different aged children and their skill levels.

“Egg” mode allows young children to watch a video based on this pigeon’s exploits, and it is nice that the story changes each time with titles such as “Don't let the pigeon wear your shirt” or “Don’t let the pigeon borrow your cell phone.” There is no interaction here past shaking the device when the pigeon shows up, but the look and story are exactly what Willems fans will expect and it is nice here that one can switch on text to read along with as well if one so desires.

The “Chick” section allows one to customize the video as one can select different elements with a tap such as food item, favorite game and stinky thing, and one can also record one’s name that will also be incorporated into the story.

“Big Pigeon” is the most interactive section, allowing one to record the different elements used within to make the experience unique. Here, the player will be asked to record a favorite number, person's name and other responses instead of choosing from multiple selections.

My son really delights in each of these areas. He can easily watch the “egg” mode himself, and navigate the “the chick” section as well, making his own choices as wonderful prompts and lovely words of encouragement are offered by the bus driver, guiding readers through the interactive aspect of this section.

My son does does need help with the record feature of the “Big Pigeon” as one needs to press a record button and speak clearly before the provided few seconds run out. The time offered to record is a flaw here, as one does not have enough time to answer more than one or two words at a time - an issue sometimes as when we were asked for a favorite game, our answer - “duck duck goose” - was cut off mid-thought. The big issue here is that one cannot go back and re-record areas that one knows were flubbed, which can be frustrating, to say the least.

Having said this, I do really enjoy the chance to add my own details to these stories, and most of the time the recording works without any problems. It is also fun in the way the pigeon explains the different voice being heard as a frog in his throat and is in need of a cough drop.

My son squeals with delight during these videos in any of the different levels of interactive storytelling. Here, this pedantic pigeon expresses any and all emotions when he does not get his way - throwing a huge tantrum that my son adores watching - and oddly finding it very calming to see such relatable feelings expressed.

Both my husband and I feel that this pigeon is the Bugs Bunny of my son's generation as he in some ways may be an anti-hero and not a character than one would like one's child to emulate, but adults may be charmed by this pigeon nonetheless. I was really eager to hear the voice talent chosen for this iconic character, and I appreciate that Willems himself is narrating this character, bringing a sly sophistication perfect for this pigeon, with a nuance of what I believe David Sedaris would sound like if he voiced an anthropomorphic creature for a children’s story.

I think it is simply charming how this story changes, either automatically within the simplified “egg” mode or with the use of children’s own creativity. Adults will notice that although certain words or phrases are new throughout, the majority of the story is scripted and produces much of the same experience. I can see how parents could potentially grow weary as they listen to this again and again, but for what it’s worth, I have not grown tired or bored from this entertaining storybook.

One can save up to five favorite stories in the vault, but I wish there were more specific instructions on how to do so as I am not able to figure out how this works - kind of a bummer. I do hope a better guide for saving stories will be included in a future update. 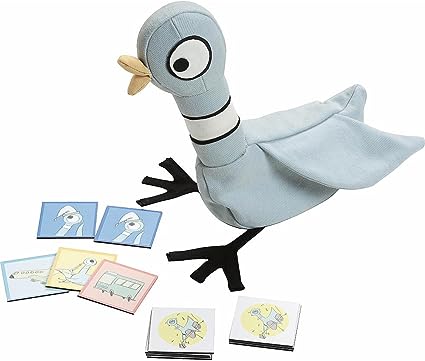 There is also a section on how to draw a pigeon, introduced and narrated by Mo Willems himself. Typical of many drawing apps, kids trace over a template that builds shapes until the character is complete. This section is fun and I like how Willems explains how the placement of the pupil within the eye greatly changes the emotion displayed - great advice children can bring to their other drawings outside this app. It is also fun that the children's completed drawing can be saved on one's device.

This app may also be an interesting app for special needs children as I really enjoy how the Bus Driver prompts the readers into making interactive choices and how he responds so conversationally in the “Big Pigeon” section as he leads one through these recordings - a nice way to teach those who may have issues understanding the give-and-take found between people talking in a social situation. Of course, it would be up to parents and teachers if the rest of this pigeon’s antics are appropriate.

We all have enjoyed this app immensely and will continue to do so. Having said this, I do think the current price of $6.99 is high compared to other apps at this price point. I highly recommend this app for the right family who will enjoy this app’s quirky sense of humor, but I think a lower price would be more palatable to parents.