You’ve seen people shoot at clay targets with real shotguns and you want to take part. But you either cannot find a place or they are really expensive. That’s where laser clay pigeon shooting comes in. But let’s run through some basics.

Real clay shooting with real shotguns shooting real cartridges has been around for many years. In fact, initially, real birds were the targets. The birds would be released from traps. The sport became very popular quickly and alternative ways had to be found of course. Many different types of targets were introduced as a discipline in shooting. Also, during this era only, it was given the name of sporting and tournaments were held in London to promote this sporting activity.
Before clay shooting, glass balls were also used as targets and this game became popular in England and also the USA.

Later came clay pigeon shooting. These are still real guns with real cartridges, but shooting at clay discs. In France clay shooting went under a real revolution when the first hand throwing device, the “Hand Trap” was used in shooting in the year 1927. The trap is made up of a spring which was loaded with throwing metal arm. Automatic traps were later developed, giving a boost to the clay shooting sport and encouraging people to take up the challenge.
Of course, although clay pigeon shooting is an awesome exhilarating sport, there are some limitations which make it inaccessible to many people. Without going into detail, it’s only allowed at specific locations after being registered for safety reasons, the ammunition is expensive and not everyone can safely fire a real shotgun. 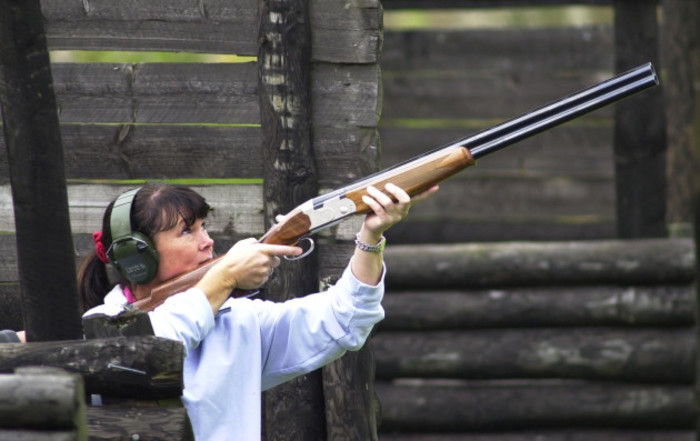 These limitations is what lead to the introduction of laser clay pigeon shooting. It is played with authentic (real), but de-activated 12-bore shotguns. This means that these shotguns can no longer fire real cartridges and instead have an infrared beam in the barrel of the gun, which is fired at the reflective discs (stilled called “clays” even though they are not made of clay anymore). Each laser clay pigeon shooting system has five shotguns and a scoreboard.
When the trigger is pulled, there’s a realistic shotgun ‘bang’ and hits are indicated by the sound of a breaking clay and the score will appear on the scoreboard.
Up to five people can shoot at the same target (clay), launched from a number of possible positions at differing speeds and angles, keeping the game interesting and challenging. There are several games, requiring increasing skill levels.

Most people who have done real clay pigeon shooting are sceptical initially. However, they quickly realise that although laser clay pigeon shooting is certainly slightly different to the real thing, you still get an immense amount of fun doing it. And that says a lot about the game.

Ant this game is certainly not just for men. Some of the best shooters are from the younger generations and also a large proportion of women seem to have a natural aptitute for the game. That means anyone can do it, kids, parents, corporates, families and friends.

Clay Pigeon Shooting Near Me

CryWolf is an entertainment operation on the Smuts Museum grounds in Centurion, Pretoria. We pride ourselves in the superior level of service we offer to our customers. It doesn’t hurt that we have one of the best designed entertainment venues in South Africa and an attitude to serve. Click on the links to get more information on our Laser Clay Pigeon Shooting and Laser Clay Pigeon Shooting Prices.