Casey is a melee weapon that increases curse by 2. Swinging the bat after a long charge-up will damage nearby enemies and reflect nearby bullets. The bodies of enemies killed by the bat will be launched and can damage other enemies.

Retrieved from 'https://enterthegungeon.gamepedia.com/Casey?oldid=54384'
(Redirected from Pigeons)

Doves appeared in all Valve-made maps with the exception of Arena maps, Target, and Item Test. There were 78 perched doves in total.

There were two types of doves: perched and flying. The perched doves did not move, blink, or fly; they remained perfectly stationary, unless attacked or touched by a player, which would cause them to explode. The explosion caused no damage or knockback. Doves that had exploded would re-appear at the beginning of a new round. The Über Update removed the doves from maps.

On June 17, 2011, the Team Fortress website was updated with pictures of doves and dove droppings across the top of the main page. Additionally, clicking on one of the three doves 'perched' at the top of the page lead to three different pictures, each with different connotations to the Medic: a bombed, ruined hospital; a waiting room; and a doctor's office, respectively, all of which appeared empty and abandoned. On June 20th, 2011, the doves on the main page were removed due to the redesign of the Team Fortress website.

When used, the Meet the Medic taunt spawns many doves that fly from behind the Medic. A flying dove has a one out of one hundred chance of being released whenever a Scout is killed via gibbing, or while wearing a Bombinomicon. 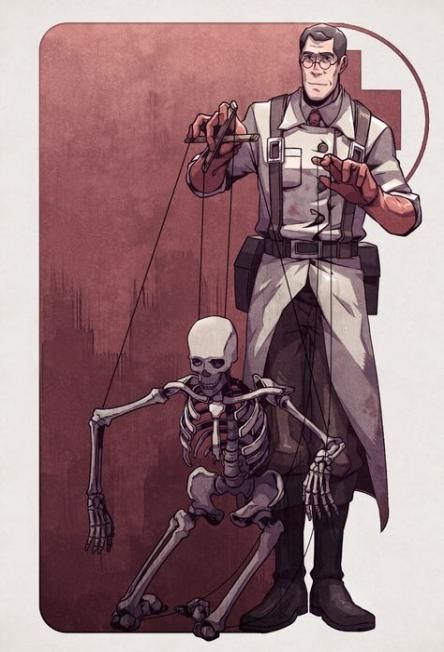 See Dove locations for a listing of all dove sightings.